Japan's exports slowed down in October amid struggling automotive sector

Japanese export growth slowed down to 9.4% y/y in October, the lowest level since February. Import growth also slowed down, but remained higher than that of the exports, which resulted in a third consecutive month of negative trade balance. In October, Japan’s trade deficit shrank to JPY 63.4bn from JPY 643.1bn in August and JPY 624bn in September.

The exports slowdown came after seven months of double-digit growth in a row. However, the automotive industry, Japan’s major exporting sector and one of the key engines of the economy, was hit by the global supply chain bottlenecks, especially the chip supply shortages. In October, the car exports plunged by 40.9% compared to that in the previous year. Car exports to China and the US, the two top exporting destinations for Japanese cars, dropped by 46.8% and 47%, respectively. The total exports of auto parts also registered negative growth in October for the first time since February, while the exports of other key exporting commodities like semiconductors, power generating machines, and electrical appliances increased by 15.1%, 2.4%, and 10.9%, respectively. 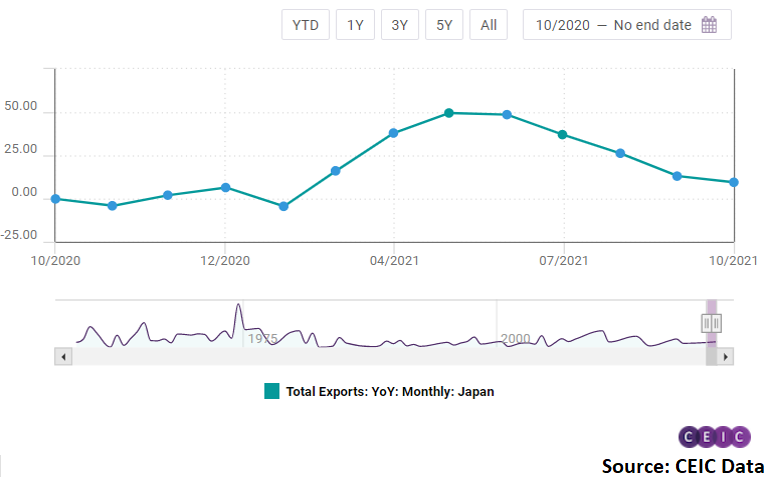 The total exports of machinery and transport equipment also declined by 1% y/y in October mainly due to the weak performance of car and auto part exports. However, the remaining industries registered positive growth in October. Driven by the surging oil prices the exports of mineral fuel surged by 210.1% y/y, the highest growth rate since 2008.

Further data and analysis on Japan’s economy are available on the CEIC Japan Economy in a Snapshot – Q3 2021 report.

US building permits surge amid increasing demand for new homes