India’s recession spell comes to an end in Q3 FY2021

After suffering two consecutive quarters of contraction in GDP, India has registered a growth in its output by 0.4 % y/y in Q3 FY2021. This officially marks the end of the recession for the country. 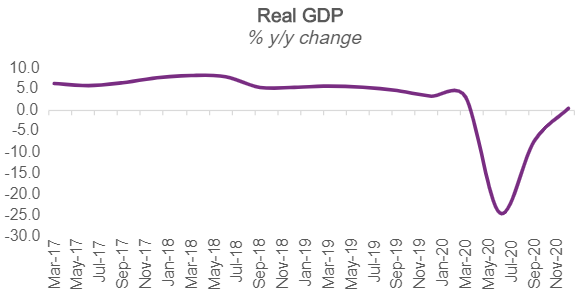 India is slated to become the fastest growing economy in 2021 according to consensus forecasts, which estimates a growth of 9.9% y/y.

The government stimulus and the RBI’s responsive actions have been crucial for this turnaround. India is likely to witness an acceleration in its output for the next quarter and continue the expansionary phase of the economic cycle.

Join our India Economist for a discussion on the state of the economy in Q4 2020, and what the high-frequency indicators of the economy are signalling. Sign up to our  "India Economy in Brief" Webinar, taking place on Thursday 4th March, here.

A Year of Rebound? How to Use Forward-Looking Data to Assess the Post-COVID Recovery

CEIC Leading Indicator: Business Cycle in Brazil Could be Past Its Peak

PPI for producer goods surged by 5.8% y/y in March, while PPI for consumer goods only recorded a 0.1% y/y increase.
Data Bytes

The latest figure is also multiple times higher than the same month in 2020, as the deficit amounted to USD 119bn.