The decline in the overall Euro Area manufacturing PMI can be attributed to the decrease in the biggest economy in the currency union - Germany.

The manufacturing business activity in the Euro Area decelerated in October, the flash estimate by IHS Markit shows. The Purchasing Managers' Index for the manufacturing sector declined marginally to 58.5 compared to 58.7 in September. This is the lowest figure since February 2021. The highest level (90.2) was posted by the input prices component, which keeps accelerating for about a year now. On the other extreme is the suppliers' delivery time sub-index, staying as low as 19.1, both of which reflect the global supply chains disruptions following the pandemic and the subsequent and ongoing recovery. The same pattern was observed in the data for Japan. 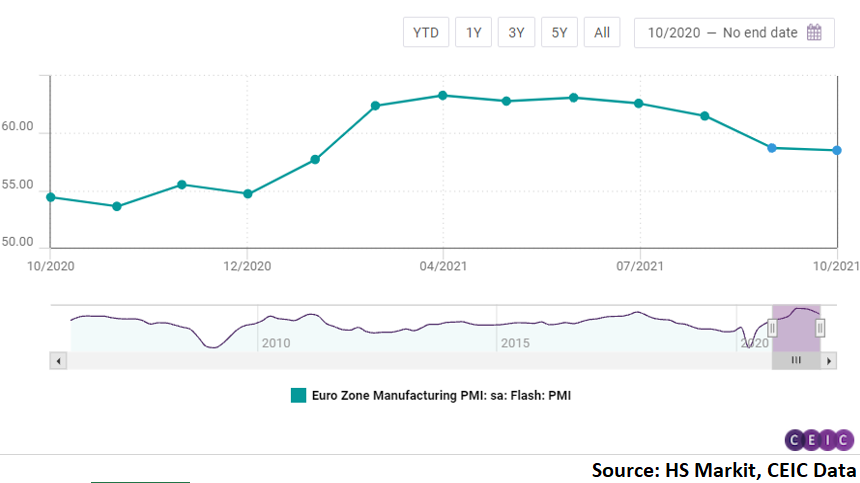 The decline in the overall Euro Area manufacturing PMI can be attributed to the decrease in the biggest economy in the currency union - Germany. Germany's manufacturing PMI dropped to 53.5 in October from 55.2 in September. This is a more pronounced decline than the one in France. Read more here.

Further data and analysis on the Euro Area economy are available on the CEIC Euro Area Economy in a Snapshot – Q3 2021 report.

Total loans growth in the Euro Area accelerates in October