Brazil’s Extended National Consumer Price Index 15 (IPCA-15) rose by 4.57% y/y in February 2021, the highest figure in 20 months, after growing by 4.3% y/y in January. According to the Brazilian Institute of Geography and Statistics, which calculates the index, the February figure was influenced by a significant rise in fuel prices. Notably, gasoline prices jumped by 2.9% y/y in February, after falling by 0.4% y/y in January. 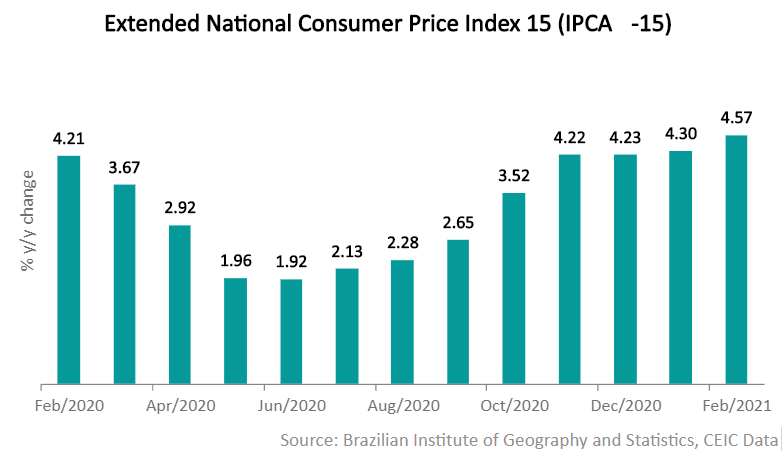 The IPCA-15 is a preview of the official inflation index, with the difference being the data collection, which is carried out from the 16th day in the previous month to the 15th in the current one.

A Year of Rebound? How to Use Forward-Looking Data to Assess the Post-COVID Recovery

CEIC Leading Indicator: Business Cycle in Brazil Could be Past Its Peak

PPI for producer goods surged by 5.8% y/y in March, while PPI for consumer goods only recorded a 0.1% y/y increase.
Data Bytes

The latest figure is also multiple times higher than the same month in 2020, as the deficit amounted to USD 119bn.