The volume of new loans in Brazil improved in June, growing by 1.1% y/y to BRL 322bn

The volume of new loans in Brazil improved in June, growing by 1.1% y/y to BRL 322bn, after falling by 13% y/y in May to BRL 287.2bn. The credit for non-financial corporations increased by 2.6% y/y in June, as companies demanded more resources mainly to finance working capital. The new loans for households recovered to the level of June 2019 (BRL 166bn), compared to BRL 145bn in May 2020. 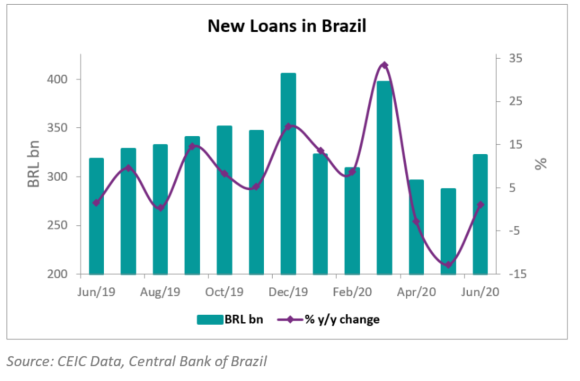 Notably, the renegotiations of credit operations by households increased by 130% y/y to BRL 6.9bn in June, while the default rate returned to the levels of January and February, falling to 3.6%, compared to 4% in April and May.