Macro Watch: With an unprecedented broadband penetration rate of 66 per 100 households as at December 2012, it perhaps come as no surprise that the average daily sales of newspapers in Malaysia have been declining after hitting a peak of 4.15 million copies in March 2004. English-language newspapers fared the worst, losing more than a quarter of sales compared to their peak levels. Sales peaked in June 2002 at 1,104,088 copies before spiraling downwards, with daily sales hovering around 800 thousand copies as of September 2012. Sales of Malay newspapers declined similarly from a peak of 2.18 million copies during March 2008 to 1.66 million in September 2012. However, Chinese newspapers managed to stave off deteriorating sales with a fairly stable monthly circulation in excess of 750 thousand since March 2010. While election months normally result in newspapers selling particularly well, it remains to be seen if this is repeated this year with the increasing prominence of electronic news. 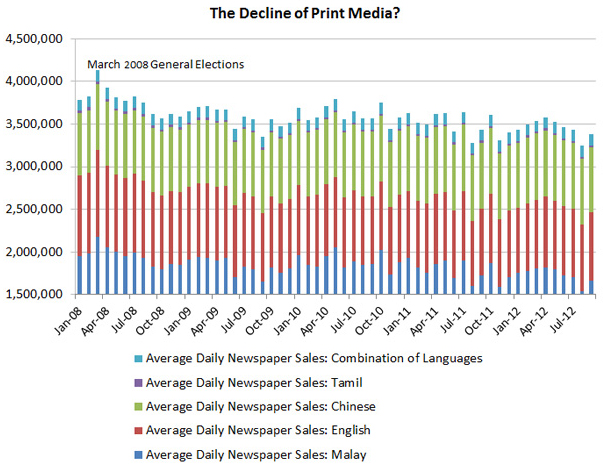 Discuss this post and many other topics in our LinkedIn Group (you must be a LinkedIn member to participate). Request a Free Trial Subscription. By Tang Ee Von in Malaysia - CEIC Analyst Back to Blog
Tweets by CEICData1