China industrial inflation slips again, CPI rises to 1.5% in May

The fast retreat since February shows a cooling sign of China's industrial economy.

Industrial inflation (PPI) in May rose at a much slower pace of 5.5% y-o-y, which was once again below street consensus of 5.7%. The fast retreat since February shows a cooling sign of China's industrial economy. Consumer inflation (CPI), by contrast, accelerated to 1.5% y-o-y in May, on par with market expectation. The drivers came from non-food CPI, which contributed 80% to consumer inflation growth on a year-over-year basis. 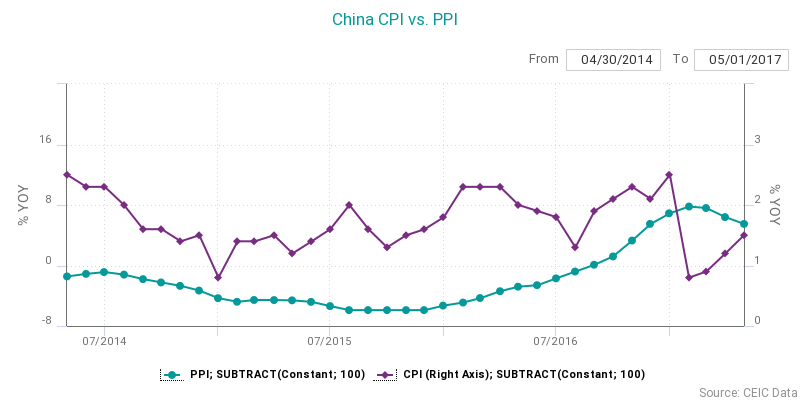 PPI slipped three consecutive months to 5.5% y-o-y in May. On a month-over-month basis, it dropped by 0.3% from April headline. This was the second m-o-m correction since April after nine straight months of growth.

A large month-over-month retreat of material costs is a clear sign of shrinking industrial demand, at least on a marginal basis. In our April PMI note, we already mentioned that producers' re-stocking willingness was low amid inventory pileup of finished goods, implying weakening demand. And don't forget industrial production was a backbone driver of first-quarter GDP. The continued cooling in industrial demand in May could point to slower second-quarter economy.

However, prices in the downstream sectors, such as transport equipment (+1.3% y-o-y), general equipment (+0.5% y-o-y), automobile (-0.2% y-o-y), and power supply (-0.6% y-o-y), were trailing low regardless of high cost growth of upstream sectors. In other words, downstream producers can hardly transfer soaring input costs to end consumers, this in turn encroached their profits. 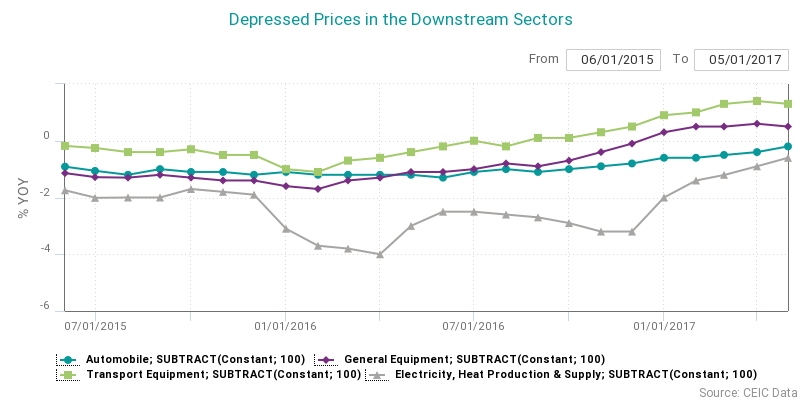 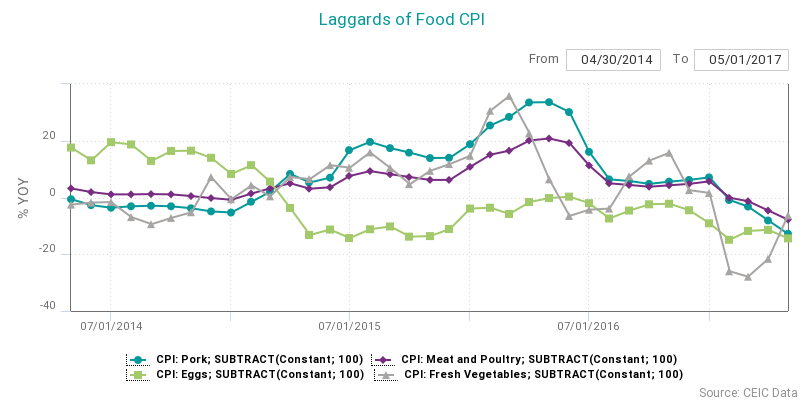 Though headline consumer inflation remained at low level, core CPI, with volatile food and energy prices excluded, was steadily moving higher to 2.1% y-o-y in May. Looking ahead, core CPI will continue the reflation pace in light of the rising prices of non-food basket.

PPI tends to recede further as base effect moderates.

This analysis was undertaking using the China Premium Database, which can be accessed via CDMNext. For those who aren't customers, you can download a free trial to gain access to CEIC Data.